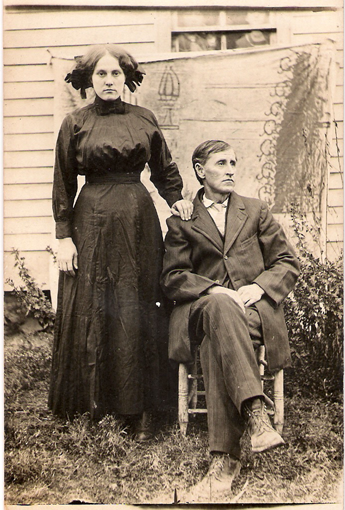 James Rainwater was the youngest son of Miles Rainwater and Frances Chaney. James was born on 17 July 1865 in Pulaski County, Kentucky, where he lived all of his life.

In 1890, James married his first wife, Martha J. McQuary. The Reverand Fountain Rainwater, James’ elder brother, presided over the ceremony. The couple does not appear to have had any children. Martha died of tuberculosis on 3 November 1911, and was buried in New Hope Cemetery.

Tuberculosis stalked this family, as it did many in the early 20th century, and on 26 October 1917, James Rainwater died, of tuberculosis of lungs and neurasthenia. He was also buried in New Hope Cemetery.

Amanda married George T. Morris two years later, and raised her daughters with him. She died in 1940, and was buried in White Cemetery, Adair County, Kentucky.

Credits & notes
Photographs contributed by Gary Jasper and Rick Jasper. Curiously, this photo contains the same backdrop as the photo of the George Alfred Rainwater family, suggesting that both photos were taken at the same family gathering.